June 27, 2008 I began my career as a foster parent. Over the past 5yrs, with a private agency, I’ve had a total of 8 children come to me. The first, Sabrina*, has been with me since day one. For the past two years I’ve had the same 4 children in my care – two, Sloane* and Elise*, I managed to adopt. With Sabrina turning 18 and moving forward in life, now seemed like the time to change directions. I’m still fostering, but with the local Children’s Aid instead of the private agency.

Megan* never did recover from her trip across the border . Things continued to deteriorate, which made my decision somewhat easier. June 28, 2013 Megan moved to another foster home within the private agency. Since then Sabrina’s been a bundle of nerves, knowing her turn is coming. Years before I knew her, Sabrina was diagnosed with Attachment Disorder – which means heartfelt relationships are generally beyond her capacity. The amount of stress and tears she’s shedding is a testimony that I did somehow land in her guarded heart. However the hours Sabrina spends screaming that she hates me and wishes we’d never met doesn’t leave me warm and fuzzy. This is how she copes with the impending loss – trying to quench her emotions with hate.

So, in the midst of all this emotional upheaval, I’ve painted two bathrooms and two bedrooms (one somewhat voluntarily, the other because a weekend visitor trashed it….maybe more on that in a future post). I’ve rearranged my living room. I’ve built a wooden walkway in my front garden. I’ve bought two cribs (hopefully to be used in about 6mths time). Furniture and pictures have shifted from one floor to another. This is how I deal with loss. I decorate. I try to make it all beautiful. I change my surroundings so the absence of an individual isn’t as predominant because everything around me is different. That chair you used to sit in is no longer there, so maybe I won’t notice that you’re not here. Grief, loss, trauma. These are the hallmarks of my career.

And now, today, I start anew with another agency and a fresh batch of kids. I’m listed as being available for up to 3 girls between the ages of 6 and 12. In working directly with Children’s Aid there’s more uncertainty about how long the kids will stay (the private agency tended to have long term/permanent situations). So I may get to redecorate soon – but, depending on the turn over rate, might need to find a new coping strategy.

Here are the rooms as of this morning, my first official day with Children’s Aid…..praying for the little ones soon filling them! 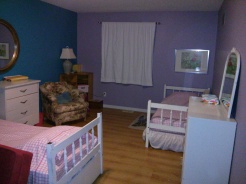 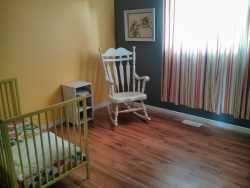